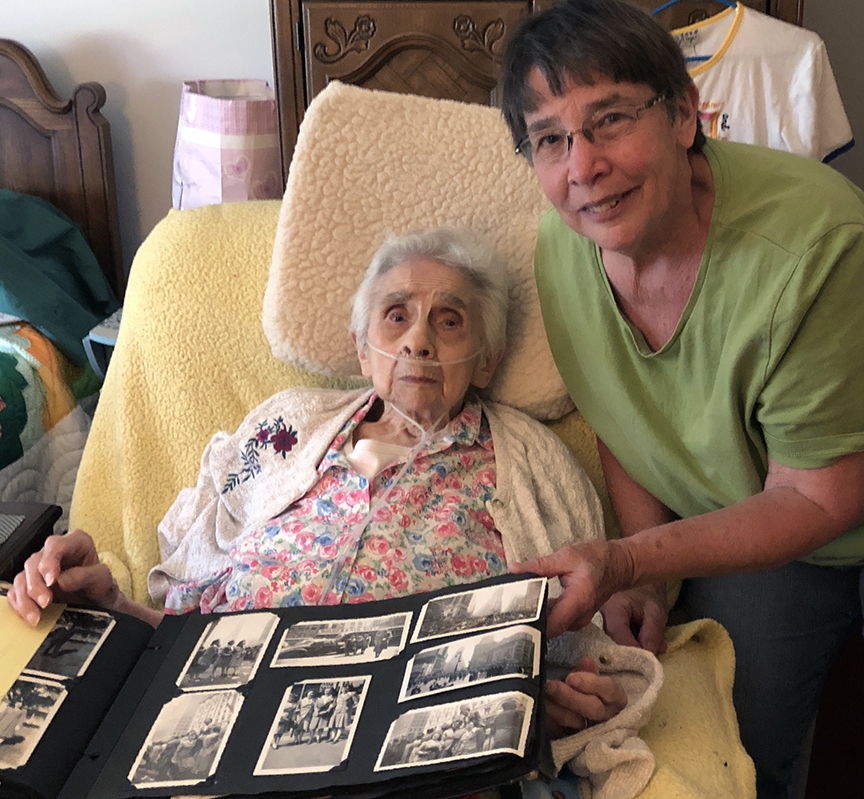 At 97 years young, Frances Shoop has a keen mind filled with memories of milestone adventures and beloved family moments. Frances lives with her daughter and caregiver Louetta Romberger in Millersburg. The two enjoy looking through family photo albums of the past, and cherish frequent visits from Louetta’s grandchildren (Frances’ great grandchildren).

Through Homeland Hospice’s in-home care relief program, Louetta receives up to 40 hours of care each month at no cost. Homeland Hospice is a hospice program that serves communities throughout Central Pennsylvania. From light housekeeping to help with medication reminders, the in-home care relief program helps Frances and Louetta make the most of every moment together.

Louetta treasures conversations with Frances and the opportunity to learn about her mother’s life experiences.

Growing up, Frances and her parents rented a farmhouse near Millersburg. To afford the rental fee of $10 a month, Frances’ father cleared the land with his tractor and created a small garden for the family to grow their own vegetables.

Frances attended a one-room schoolhouse up to the eighth grade when she transitioned to high school. While she had dreams of becoming a nurse, the country was in the throes of World War II.

“At graduation, most of the boys had left for the war,” Frances says. “My plans of becoming a nurse changed.”

With labor shortages, Frances joined the workforce with other local women. She worked for a tool company and made equipment to support the war efforts.

On May 8, 1945, Frances and her friends where in Times Square on V-E (Victory in Europe) Day and experienced the pandemonium firsthand. This day marks the formal acceptance by the Allies of World War II of Germany’s surrender. Unlike many of the iconic images of the day depicting celebrations, Francis and her friends were frightened.

“The crowds were out of control and many men were aggressive,” Frances says. “We were terrified and took the first train back to Harrisburg.”

Following the end of the war, Frances and her friends were fired from the factory to make room for men returning from the war in need of jobs. Frances quickly found employment working for a shoe factory where she worked for 39 years.

Like her mother, Louetta aspired to practice nursing. She entered the profession soon after high school and worked up until her recent retirement.

“Being a nurse helps me understand my mother’s needs,” Louetta says. “I feel prepared to handle situations as they arise.”

As a caregiver by profession, Louetta is cognizant of the importance of quality care.

“I’ve come to depend on Homeland Hospice because I trust them,” Louetta adds. “Whenever I need help, hospice is always here for me.” 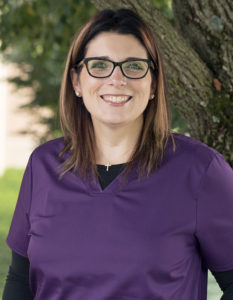 By guest writer and Homeland Hospice Nurse, Helen Haddick. This article is republished with permission from Helen’s blog From Saving to Sending, Hospice Isn’t Just About Dying. Prior to becoming a Hospice Nurse, Helen’s journey included ten years of being a Med Surg, ICU, and Perianesthesia Nurse.

As nurses, we are taught to be number lovers. Blood pressure, pulse, weight, height, time of last meal, distance ambulated….you get my drift… It is one of our chosen methods of communication… Listen to a nurse giving report… it’s a complex word soup of stats, values and findings.

For hospice nurses, it’s a tiny bit different, because while numbers are still important, they are not critical as they might be as say, to an ICU nurse. While we still treat the numbers, the patient and how they feel always take priority. My entire purpose is to make you as comfortable possible in any way I can.

But, what if making someone comfortable had nothing to do with a pill or a lab value? What if it couldn’t be fixed by a bandage or a prescription? Often times, the most profound healing unexpectedly changes both nurse and patient and cannot be taught or found in a book.

She was the type of older lady that we all think we will become. A spunky cross between Sophia and practical Dorothy, she lived in small home surrounded by her artwork and with her very loved, but equally as old dog. When I first met her, I thought she would never warm up to me. But, as my visits grew more frequent, her guard came down and I was privileged enough to really get to know all about her. She would say my visits were a gift, but, getting to know her was the real gift.

One afternoon, I entered, as I normally would have and expected to see her in the oversized brown recliner watching whichever judge show happened to be on. She was in the recliner, but, as she turned to greet me, her face was streaked with tears that glittered like prisms in the afternoon sunlight. “Honey,” I exclaimed and rushed to her side, “What’s wrong?” She brought her soft and weathered hands to her face. Hands that told countless stories and faced so many of life’s challenges. “I just found out that the last of my pinochle friends passed away this morning.” As I reached out to embrace her, she told me that they had been a group of 3 couples and now she was the last person left.

She was showing me a sign. It was a very vital sign, but, it had nothing to do with numbers. More important than a blood pressure, this was a glimpse into her internal emotional world. She was scared, alone, afraid, lonely and felt left behind. If these had been quantifiable vital signs would I have not treated them?

I pulled up a chair next to her and spotted a deck of playing cards. As I handed them to her, the emotions on her face changed from sadness to disbelief to sheer joy. “Teach me to play. And go easy, because I am no card shark.”

For the next hour or so, I got schooled on the game of pinochle. Had an ice cube’s chance in Arizona of ever hoping to win a hand. Truthfully, that game is so confusing that she could have been making rules up as we went along and I would have been none the wiser. That was not the point. Just like before, it was never about the cards.

She laughed, she told stories, told me about how she met her husband, how she adopted each of her dogs, how she started painting and how she raised her children. She would start remembering and a far away look would cross her face but, she would come back, just in time to tell me my hand was worthless. As she started to tire, I helped her to her bed and before she drifted off, she held my hand and just said “Thank you.”

How those we care for are doing sometimes has nothing to do with numbers. In this hurried world where we have to fit so many tasks in a day, so much can be overlooked. Stop and really listen to what someone is saying and hear what they aren’t saying. It’s in that silence that you will find the most vital of signs.