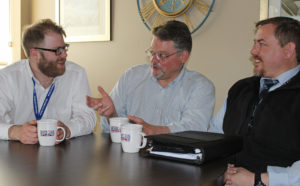 Having a background in children and youth spiritual services, Andrew Wenger, did not know what to expect when he walked into his Homeland Hospice internship in September 2018. Andrew has spent the last seven months shadowing Dann Caldwell and Mark Harris. They taught him to listen more than speak, based on the needs of the patient and their family.

The value of silent observation was a helpful tool in “getting the full picture,” and “meeting the patient or family member where they are.” Andrew says that he was also given the opportunity to work with bereaved children and was able to familiarize himself with the process of preparing ahead of time, meeting them in the moment of loss, and continuing to counsel after all sets in.

Working with Hospice patients and their families has given Andrew a lot to consider in his future career of church service. Andrew says he will take the lessons he has learned and apply them to his work with church congregants, so that all are given a safe space to come and have someone who will reach out them in a moment of need. Good luck, Andrew! Thank you for all you did during your time with us!

Matt Evans of Duncannon lived his life with passion and purpose. He enjoyed rooting for the Tennessee Volunteers football team, making his famous chili for family and friends, and playing golf and video games. Undeniably, his greatest love was his wife Kathy, son Brady, age 12, and daughter Taryn, age 13.

Matt was diagnosed with pancreatic cancer in August 2017 and died in February 2018. After spending much of December 2017 in the hospital, Matt came home on New Year’s Eve under the care of Homeland Hospice, a hospice program that serves communities throughout Central Pennsylvania.

Through Homeland Hospice, Matt received nursing care and assistance, medical equipment and message therapy to help manage his symptoms. This support helped Matt spend every precious moment with his family.

“Our family created a strong bond with Matt’s nurse Brianna Schriner,” Kathy says. “We couldn’t have asked for a better person to support our family during this difficult time.” 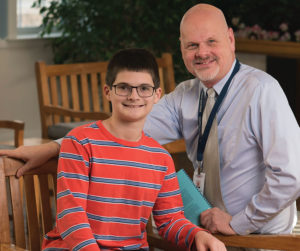 A month before Matt died, Homeland connected the Evans family to pre-bereavement counseling with Brian Medkeff-Rose, M.Div., M.A., Bereavement Counselor at Homeland Hospice. Brian continued to meet with Brady and Taryn after the death of their father.

“Brian makes it easy to talk about our dad,” Taryn says. “He let’s us know that its okay to cry.”

During their conversations with Brian, Brady and Taryn enjoy talking about topics they once shared with their dad like sports, video games and books.

“Grieving young people are attempting to cope with so many changes in their lives,” Brian says. “I have always been impressed with their courage, and consider it a privilege to be part of their lives along their way toward healing.”

Before his death, Matt passed along treasured gifts of significance to his children. He gave Taryn DVDs of ESPN’s 30 for 30 series, a collection of documentary-style sports stories. For Brady, he bestowed his cherished golf bag. These gifts serve as reminders of precious memories Brady and Taryn made with their father and the valuable life lessons they learned from him.

Two days prior to Matt’s death, he was able to participate in a rite of passage for his son. Brady had completed his Cub Scout requirements and was scheduled to officially “bridge over” to Boy Scouts in the spring of 2018. Brady’s den leaders organized a special bridging ceremony at the Evans’ home so Matt could personally pin Brady with his Boy Scout pin, marking this important crossover in Scouting.

“It was surprising to see my dad cry,” Brady says. “It’s a special memory I will never forget.”