On Saturday, June 9, runners and walkers of all ages and abilities laced up their sneakers for the 4th Annual Heroes for Homeland Hospice 5K at City Island in Harrisburg.

The event brought together nearly 100 runners who enjoyed the course along the Susquehanna Riverfront, as well as Homeland employees, volunteers and individuals who have lost a loved one. 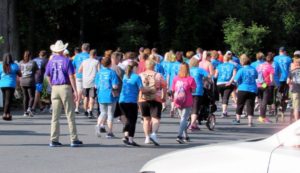 For Jen Phillips and her family, the event was a chance to honor her father, Bob, who died in 2015. Jen’s family proudly wore “Team Bob” badges on their shirts with a photo of her father.

“Homeland was accommodating of my father’s needs,” Jen says. “After he died, they followed up with our family and offered bereavement support.”

Through the grieving process, Jen’s mother, Ann Phillips, has become a Hospice volunteer to help others during their time of grief. 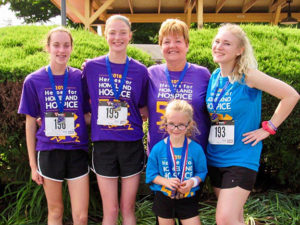 Homeland Hospice provides bereavement support through phone calls, mailings, one-on-one consultations and support groups up to 13 months after the death of a loved one. Support groups offer self-awareness, healing, helping others, a sense of community and coping skills.

For many Homeland employees, the event was a family affair. Debbie Klinger, RN and Director of Homeland Hospice, enjoyed spending time with her granddaughters, Morgan and Padget, at the 5K.

“I like to spend time with my grandmother at the race,” Padget says. “Plus, the money goes to help people.”

Padget, who is seven years old, is a veteran racer. This was her third 5K for Homeland Hospice. She predicted the course would take her one hour, but she finished it in less than 46 minutes, a personal best for the young runner. Padget placed third in the 14 and younger age group.

A complete list of race results including individual running times can be found at parunners.com.