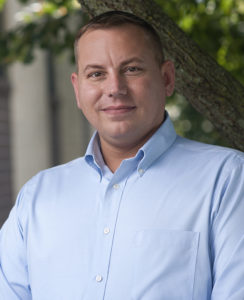 Throughout his life, Chaplain Mark P. Harris, M.A., M.Div., Spiritual Counselor at Homeland Hospice, has responded to the call to serve others. On his journey to becoming a spiritual counselor, Mark learned valuable life-lessons, which enriched his understanding of faith and his compassion for others.

Mark joined the United States Navy after high school and became a hospital corpsman, providing medical support to sailors and marines nationally and internationally. In 2000, Mark transitioned from active to reserve status. After the terrorist attacks on September 11, 2001, he wanted to do more. He returned to active duty and trained other corpsman for deployment. Mark’s time in the Navy was a period of spiritual growth.

“As a corpsman, I focused on physical wellness,” Mark says. “I was feeling a higher calling. I wanted to help people on their spiritual journey, even during their darkest hours.”

Mark enrolled in online courses through Liberty University and earned a Masters of Arts in theological studies and divinity. While on his way to becoming a Navy chaplain, Mark was diagnosed with multiple sclerosis. He retired from the Navy and began to plan the next step in his career.

Mark joined the Homeland team in 2017. In his role, Mark helps patients and family members deal with spiritual issues, repair strained relationships to bring peace to the patient, and supports individuals during their final hours.

“I meet people where they are on their journey,” Mark says. “I assure them they are not alone.”

Recently, Mark served as a guest speaker at the Silver Lake Institute and Asbury Retreat Center’s 145th Anniversary. The Center, located in in Western New York, draws individuals from all parts of the nation to learn and enjoy various aspects of art, music, social justice and spirituality.

In his homily, “Faith in the Sunshine and Storm,” Mark spoke about finding faith and holding on to it during good and difficult times.

“I learn so much from the people I serve,” Mark adds. “It’s an honor to help others during their final journey.”

Spiritual counseling is a component of Homeland’s holistic approach to health care. Counselors and chaplains respect each individual’s beliefs and offer support and encouragement. In addition, Homeland offers bereavement support to families for a full 13 months following the death of a loved one.