You are here: Home / News / The Tea Light Candle
test
This article is reposted with permission. We thank Gabrielle Elise Jimenez, hospice nurse, end-of-life doula, and conscious dying educator, for sharing her experiences at thehospiceheart.net blog._______________ 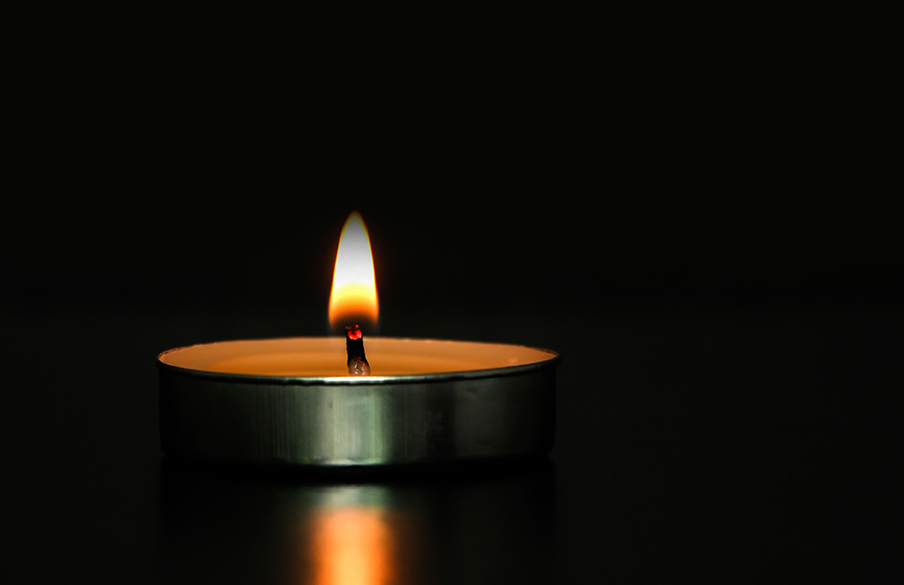 If you could relive just one moment in your life, what would it be? This is one of the questions from the Death Deck and was asked recently at a game night. My immediate reaction was to relive moments that brought me joy, of which there are many. But much to my surprise, my answer went to a place that caused me to react emotionally… and has hovered over me for days.

About twenty years ago, I drove my dad home the morning after Thanksgiving dinner. He asked if I could stay for lunch, but I told him I had other plans. On my way home I started to feel guilty, thinking I should have said, “yes”. I left a message for him that afternoon, offering to come the next day, but no response. The next morning, I left another message, but no response. That night I was called to the hospital where he died shortly after my arrival. He had been ill for several years and had taken a turn for the worse after I left him that day. He did not recover. About a week later, our family gathered in his room to clean out his things. I saw the light on his answering machine blinking. I pushed “play” and listened to the messages I had left, the ones he had never heard. And I cried.

So, as I was pondering the question on game night… I went past the beautiful memories I would like to relive again and instead went to the day my father asked me if I would stay for lunch. I said out loud, that if given that opportunity again, I would have said, “yes.”

This has weighed heavy on me for several years, but that night, during game night, it rose to the surface in a way I was not prepared for. As the words came out of my mouth, I felt relief. It didn’t matter that I said it in front of people I have never met before. It didn’t occur or matter to me, what they might think. I was not worried about judgement or ridicule, because I felt safe. And when I said those words, I felt free and I felt light, because the weight had finally left my shoulders.

I find comfort in ritual and ceremony, and it is in these moments where I offer the suggestion of the tea light candle. I encourage them to light a tea light candle, place it on a flat and safe surface, and as the flame burns, to say the things… all the things. When the flame goes out, the message has been received.

Today I lit a tea light candle, and I told my dad how truly sorry I was that I didn’t stay that day. Before the candle had even burned halfway through, it blew out. I giggled a little, wondering if he had been hanging around waiting for me to say something. But after a while, what I realized was… he wanted me to let that weight go… he too thought I had carried it far longer than I should have. This brought me comfort.

Whether you light a tea light candle, write a letter you never send, or whisper in the wind apologies, forgiveness, or goodbye… let it go. The weight of carrying things that happened long ago, that you cannot change, can be heavy and can distract you from moving forward. You are only human; we can all list a million things we wish we could have said or done differently. Let it go… Be kind to yourself, and find a way to stop carrying this weight. In my case, I lit a tea light candle… and the weight feels a whole lot less. xo