You are here: Home / News / Homeland Hospice riding in style with the AACA Museum for a unique fun...
test 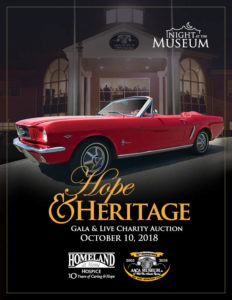 Join Homeland Hospice and the original Ford Mustang designer for a Night at the Museum.

Award recipient Gale Halderman began as a designer with Lincoln-Mercury in 1954 and four years later became head of Ford’s Advanced Studio. In addition to leading the team that created the first Mustang, during his eight years as studio chief, Halderman oversaw the development of the Lincoln Mark VII and VIII.

The AACA Museum, Inc. will hold a live auction with auctioneer Josh Katz of the Katz Family Foundation during the Gala, which also marks the 15th anniversary of the Museum. Many interesting auction items including artwork and special experiences – ones you cannot buy anywhere else – will be up for bid.

During the event, visitors will have the opportunity to tour the museum’s featured exhibits including “Mustangs: Six Generations of America’s Favorite Pony Car,’’ with more than two dozen Mustangs, a trio of Thunderbirds courtesy of the International Thunderbird Clubm and the 1985 Modena Spyder aka the “Ferrari” from the movie Ferris Bueller’s Day Off.